A simple discussion about the "Blossom crisis"

Its not soo bad as it sounds, its just that older swordsman classes that did not get a decent buff on recent balances are going extinct…
If you go check on https://treeofsavior.com/page/class/ranking.php
Its funny when you look at Blossom popularity in Hot 10/Top100.
Or when you look at the Rare 100 and notice that 99 are Swordsman builds(one point to rangda meme).

I seriously hope they buff some of the less popular classes at least to make them ok.
My list of classes to work with are: HighLander, Hoplite, NakMuay and Matador.
These 4 already recieved changes but are way of the track as much i can tell.

It’s not like I don’t want to be carried by a new face, baka!

tsundere at its finest! 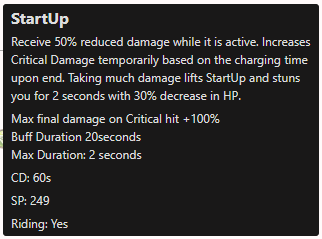 I found the culprit. This buff is simply way too powerful.

It’s not just that. The insane buff two handed weapons have got also plays a large part. A +16 tra10 varna two handed sword gets 12124-17166 atk, and barbarians can raise the minimum value by half of that, greatly increasing the average. A +16 tra10 ornament adds more than 2k phys attack to it, and easily gets to 2.5k phys attack with a gem (it doesn’t add much, but they were limited to 5 gems before). Even putting gems aside, we’re talking about 14308-19350 atk from weapon and ornament alone, or 17137-19350 atk for barbarians. So an average of 16829 or 18243 depending on the case. For comparison, a varna rapier +16 tra10 gets 12706 atk instead. As the attack formula uses the sheer physical attack in two places (either normal or multiplied by 1.5 when critting, with phys crit attack added just after) and in the logarithmic part (phys attack alone here) this alone creates a large inbalance between different weapon types.
Let’s take Misrus for an example, with 29652 def. I’ll use my own stats with the fencer build and rapier as a baseline, so around 22000 atk (a barbarian/doppel/blossom blader gets more str from the base build stats, by the way, so it would be slightly higher in their cases).
The logaritmic part ends up at around 0.2466. Considering no buff and no crit, it ends up as phys atk multiplied for the logaritmic part, for a total of 5425 (this would be eventually multiplied for the various skill factors and damage buffs). A two handed weapon would have around 4k more average attack, for a total of 26000. The same formula would result in a logarithm of 0.2761 and a total of 7178, 1.33 times better than the rapier, and that value gets further multiplied by the buffs and skill factors. A two handed weapon with barbarian attribute would have further attack, adding around 1400 atk on average, bringing the total to around 27400. The logarithm in this case is around 0.2858 and the total is 7832, so around 1.44 times compared to the rapier.example. Crits just further amplify the difference between weapon types, since phys attack is multiplied by 1.5 times in those cases. But you get the idea. It’s not like you can make up for such an high difference of sheer attack. And buffs like swell hands, working as a percentage of atk, further amplify the difference again.

Worse is that such a large attack buff was given to builds that already had inflated skill factors and additional damage buffs on top of it. It’s not surprising that it ended up so unbalanced.

Just like in every game ever, swordman is always the popular pick since it can take hit and deal damage. So it’s no surprise that rare 100 is all swordman.

So it’s no surprise that rare 100 is all swordman.

Rare100 are the least picked combinations… before 4ever update there where all the 5 base class into the rare 100. That’s how hard blossom hit the balance.
Spears are still useful in PvP, and murmillo too. But “dps” classes like High Lander and Nak Muay will go extinct soon.

nak is dead since the last SFR patch, some people still use highlander instead of barbarian due to art and crossguard. Least picked combination are all swordman doesn’t mean blossom blader push those into extinction, if you look at those, 40% never work in the first place due to using pelt and weapon swap, 20% of those are trying to fit blossom blader into what ever random build and realize it can’t carry those, the rest also rely on weapon swap or no big damage skill.

It’s 2020, but I’m somehow not surprised that Cross Guard is still going under the mainstream radar. It certainly has its merits. Before the Ep12 Update, it was possible to hit things with 6m total damge using Zornhau and Cross Guard. The damage dealt was doubled, but thanks to it being through an additional hit, it wouldn’t be affected by the damage cap. Nowadays, you can follow up Cross Guard with Blossom Slash to leave a pretty big hole in the enemy’s hp.

Of course, what’s probably the case is that people see Cross Guard as “that useless blocking skill on an even less useful Swordsman class” rather than a means to double your damage output. It’s a shame.