A new idea for Monk : dual-wielding one hand maces

Lately I’ve played some old Dragon Quest when I came across a certain monster called “Wrecktor”, using two one hand maces as weapons to attack. 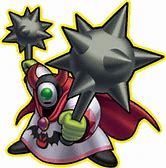 Since Monk is a class that’s bound to use one hand maces and has Double Punch, an attack stance that uses both hands to attack, it dawned upon me that this could actually be a great idea to have Monk save face in the Cleric tree using two onehanded maces instead of one + shield or a two handed mace.

It would also make the class unique inside the tree, as it could be played offensively or defensively without having to invest into a twohanded mace,while keeping the value of the already released Skiaclipse Mace.

The execution of this is easy:

for the following effect