A concept for a Matador rework

Right now the matador class suffers from several issues, and it may rightly considered subpar. Here i will point out some of those issues and some ideas to rework the class.
But first, the issues.

So, let’s go with the changes and additions, along with explanations in italic. When an attribute or skill uses certain values, i provide example values that i think may work.
They’re aimed to further the hit and run/agile fighter focus, and to develop a single target/enrage

Rapier Mastery. It works as all the other ones - 25% of the subweapon attack is added to physical attack.

Any other one-handed weapon got it by default. So there is no excuse. If they’ve got issues with epee garde, change epee garde instead (along with the whole class, since the offensive potential of fencers wholly depends upon it).

Rapier Mastery: Buckler - If a rapier and shield are equipped together, adds X% (5%?) of the shield defense into evasion, but the shield’s defense is decreased by Y% (25%?).

As agile fighters, you aren’t fighting bringing tower shields along; so having an attribute that trades some defense for added evasion makes sense.

Banderillero: when using a rapier, deal 2% more damage per stack of banderilla debuff on the enemy (max 20%).
Banderilla(debuff, 20s duration): applied by matador skills. Some skills may apply multiple stacks. Decreases attack and defense by 1% per stack. Max 10 stacks.

Picador: When you hit an enemy with Muleta, Faena, Paso Doble, Corrida Finale or Estocada, apply 8s of bleeding.

As above. Also, since it applies only when hitting with Matador attack skills, the duration is slightly increased.

And now the skills.

Capote: Max level changed to 5, cooldown changed to 20s. Still threatens up to 10 nearby enemies, prioritizing bosses, like it does now. In addition, inflicts (skill level/2), rounded up, stacks of banderilla to the enemies (so up to 3). Inflicts Capote debuff to enemies, reducing their accuracy and evasion by 2% per Banderilla stack (calculated at the time of skill use, after its own banderilla stacks are inflicted) for a duration of 10+(1*skill level) seconds. “Capote enhance” attribute further increases the accuracy/evasion reduction, up to 32% (so, it keeps the same value as now).

It brings it more in line with Swashbuckling, albeit targeting less enemies; also, by tying skill efficency with banderilla stacks, it forces the player to properly use Matador skills.

Muleta: Max level changed to 10. Works like now, but it prevents dodging or blocking during the channel - so that you cannot fail countering by dodging an hit you were deliberately trying to get (never tried if blocking has the same issue, to be fair). Critical rate per successful counter is changed to 3% per level. Also inflicts 2 banderilla stacks on successful counter. Doesn’t inflict SeeRed status on beast enemies anymore. SFR changed to 914+(150.9 * (skill level-1)) (max 2423%).
No changes on Muleta attributes.

Avoids the issue of dodging hits while trying to counter. By reducing the amount of points needed and raising the max SFR - from 1668,5 to 2423 - it makes getting additional levels more enticing on a skill that was usually got only due to the cooldown reduction attribute. Faena will work around Banderilla stacks, so there is no need for SeeRed status to exist anymore.

Faena right now is really bad; This makes it useful, and by tying it with banderilla stacks it makes it require some ramp-up before you can deal the full damage.

It decouples Olè from threat, making so all the matadors can get the second bonus, albeit according to banderilla stacks on the enemies. Since the condition is more lenient, the amount of crit chance obtained is reduced.

One of the few skills that works well, no need for change aside from making it work with the new banderilla mechanic.

Back Slide: Max level changed to 5, cooldown reduced by 2s per skill level (so it ends up having the same effect as now)

Raising this skill has the only effect of lowering the cooldown; since there are more useful skills around now, requiring less points lightens the burden of getting it

(New Art(replaces the Flaming Bull): Corrida Finale: Ferret Marauder): A Ferret Marauder (along with several ferrets) comes instead of a bull, and then goes back. Deals half of the SFR per hit, but hits a maximum amount of 15 targets. Corrida Finale:Encore calls it for a third and last time. Inflicts 1 banderilla stack on the last hit (thus up to 3 banderilla stacks with encore).

The Flaming Bull art and its 35% SFR was, plainly put, terrible. And didn’t really change much about the skill,as it plainly added an AoE. This art is meant to change the normal skill from one that hits few targets to one with a longer duration and larger amount of targets, but that deals less damage per target.

New final skill of the Matador tree. Meant to be a strong single target hit with high chance of critting, but relatively low cooldown to make use of muleta (albeit, by having different cooldowns, you can’t just put them in a rotation; that’s on purpose). The requirement of bleeding is there mostly for lore purposes, and to justify the existence of Picador.

An helmet for rapier classes; maybe not the most original idea, but appropriate for the situation.
The normal version offers some offensive and defensive buffs; values are lower compared to the dragoon helmet, but the drawback is also relatively low (a movement speed debuff wouldn’t make sense for a matador after all, so i came up with that instead). The art makes the buff purely offensive.

Well, that’s it. I doubt it will ever see some use, but at least it made for some fun theorycrafting. It opens up defensive builds for rapier/shield matadors that want to rely more on evasion and would get paso doble, backslide and the normal Montera, or you could go for the offensive route and max the new faena, estocada and the Montera art, for example. Hope you’ll like these ideas.

There’s a bunch of interesting ideas there. I always thought the ideal identity for Matador was of a sadistic nature, stacking debuffs on a single enemy (or small group) for a long duration combat and that’s kinda the line you drew here, but in the current game state that might not work as well since you need longer duration to stack it (should be fine against bosses though). Estocada (or a skill alike) should’ve been the last class skill since they added rank 10, Matador was never about magnitude (AoE).

Well, i did see it more suited to long fights with strong single targets rather than multiple, weak enemies. It’s also why there is a single proper AoE skill - in this rework, Corrida Finale is more suited for few targets, and it gets some AoE potential only via the art.
Using banderilla stacks as a debuff is mostly due to lore - those banderilla (little flags) are planted onto the bull’s shoulder to exhaust it. If i weren’t to care about that, i would have used them as a matador buff instead, and i would have made some skills consume banderillo stacks as well (for Faena and Estocada) in exchange for stronger effects.

Oh, feel free to post your rework as well, anyway.

Well, i did see it more suited to long fights with strong single targets rather than multiple, weak enemies. It’s also why there is a single proper AoE skill - in this rework, Corrida Finale is more suited for few targets, and it gets some AoE potential only via the art.

What i meant there is that the combat right now is ends too quickly for this kind of playstyle, i personally think it’s better to have classes in that have build up value than make everybody explodes everything all time. I remember when Pyromancer was about consistent damage over time and not a killing machine that can wipe hordes for each skill tick.

Using banderilla stacks as a debuff is mostly due to lore - those banderilla (little flags) are planted onto the bull’s shoulder to exhaust it.

That is a lovely detail, though i would add a bleeding effect to the debuff.

Well… here’s my take, not nearly as conservative as yours. It’s part of an exercise i did a couple of months ago trying to revamp swordsman tree. Seems like you need to double click it to expand to full size. 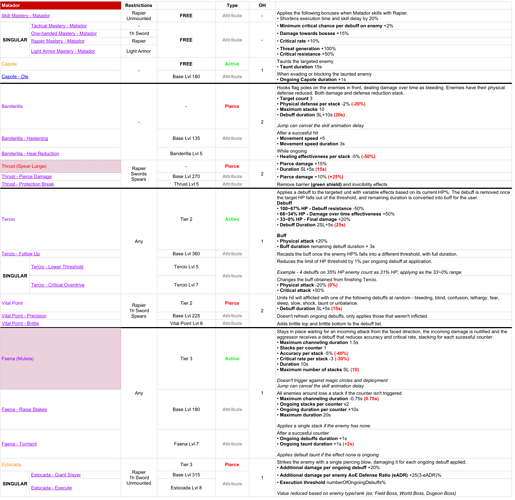 What i meant there is that the combat right now is ends too quickly for this kind of playstyle, i personally think it’s better to have classes in that have build up value than make everybody explodes everything all time. I remember when Pyromancer was about consistent damage over time and not a killing machine that can wipe hordes for each skill tick.

Ah, yeah, the combat right now is too fast-paced to give value to classes based on build-up. Monsters are either kinda weak scrubs or massive hp sponges.

I decided to put the banderilla debuffs to be more faithful to the source material and force constant matador skill use after the build-up, as refresh to keep the banderilla stacks, but the build-up itself would be kinda short in practice. It still works at a drawback for some skills - Faena would be bad for opening a fight in my suggestion, as it depends on banderilla stacks, but really strong later on.
The whole concept of banderilla stacks is inspired by the mechanics they’ve recently introduced in other classes by the way, like schwarz/bullet marker/sheriff/ardito and so on, except that it made more sense as a debuff rather than a buff like theirs.
It’s also meant to replace the “aggro” theme as, while being faithful to the source material, it’s terrible gameplay-wise. As only a single player can have aggro, tying damage bonuses to it means everyone else just cannot use their matador at the fullest. Having more of the same class shouldn’t give advantages to one and be detrimental for everyone else - that’s something i deliberately wanted to avoid.
Sure, as the tanker you do have the advantage of using Muleta and proc the cooldown reduction. But everyone else would deal the same damage with their skills, they’re just done with lesser frequency (and replaced in the rotation with something else in their case).

That is a lovely detail, though i would add a bleeding effect to the debuff.

Lore-wise it makes sense, but the bleeding is already covered by the Picador attribute, and even that is there only for lore purposes (i had to put a bleeding condition on Estocada just to give it some use). Albeit, we may have those stacks accelerate the bleeding cycle, akin to the Piercing Heart effect. But even then, it would be mostly for lore purposes than for actual damage inflicted.

Well… here’s my take, not nearly as conservative as yours. It’s part of an exercise i did a couple of months ago trying to revamp swordsman tree. Seems like you need to double click it to expand to full size.

Yours have a chance to work at all, mine is too slow to even be considered a class in the current game state.

It’s an interesting approach, but yeah, that’s a complete revamp of the system and a significantly slower pace of combat compared to what we’ve got now. Putting it as it is, it wouldn’t work.